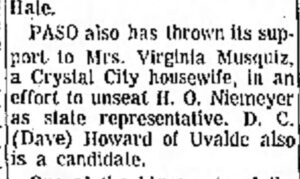 Virginia Musquiz was born in Nordheim, Texas, in 1925. In 1964, she was the first Mexican American woman to run for the Texas House of Representatives with the support of PASO (Political Association for Spanish Speaking Organizations) and for a position on the Crystal City city council. She was an influential person in south Texas, but unfortunately did not win these elections. But she went on to become the first Chicana elected as Zavala County Clerk under the Raza Unida Party ticket in 1974. She was the national chair for the Raza Unida Party, a grassroots political party for social justice minded Mexican Americans who identitied as Chicana/o. During the 1970s, she was highly active in the struggle for Chicana/o civil rights, proponent voting and voter registration drives, and other civic engagement activities. In 1973, the Raza Unida Party named Musquiz as “Chicana of the Year.”

She passed in 2002. Chicanas and Chicanos often remember Musquiz as a civil rights leader and mentor to many in the Texas communtiy.