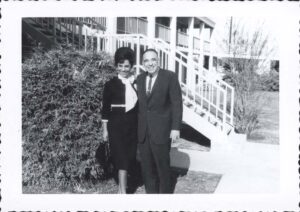 Graciela Gil Olivarez, most commonly known as Grace, was born on May 9, 1928 in Phoenix, Arizona. A “high school dropout,” Olivarez opted to take a six-month business school course instead. She went on to attend law school at the University of Notre Dame in 1967 and became the first woman to obtain a juris doctorate from the university in 1970. Following graduation, Olivarez worked as Director of Food for All from 1970-1972, then returned to New Mexico to serve as the Director of the Institute for Social Research and Development from 1972-1975. A few years later, she was appointed by President Carter to serve as the Director of the Community Services Administration. She left the position in 1980 and went on to found the Olivarez Television Company, Inc.