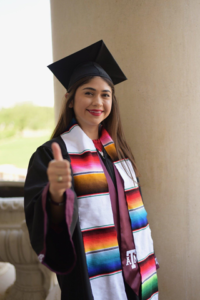 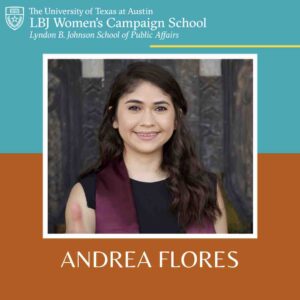 Andrea was born and raised in Cedar Hill, a small city within the greater Dallas area. She was rooted in humble beginnings; her grandparents were farmworkers and Bracero workers. Her parents both work full-time and her brother is a Texas A&M University Alumnus.

As she grew older, Andrea threw herself into sports—playing every sport available at her schools. She did not recognize her political potential until high school, when her friend (also named Andrea) pushed her to run for Senior Class Vice President. To Andrea’s surprise, she won. It was then that Andrea recognized her passion for all things political.

Within her role, Andrea was responsible for the senior traditions such as Elephant Walk- which guides students around campus, stopping at “important” monuments that make up the campus. As part of the walk, students would make a stop at the statue of Lawrence Sullivan “Sul” Ross (referred to as the Sully statue). Sul Ross was a Texas Ranger, Confederate Army General, Texas Governor, and president of Texas A&M with an infamous history supporting white supremacy. Most heinously, Sul Ross was an avid member of the Ku Klux Klan. Andrea noted this tradition as inherently disregarding the concerns of students of color and the Elephant Walk team redirected the route for Elephant Walk and removed Sully. This allowed for a more inclusive and diverse tradition that welcomed all Aggies. Andrea is also the founder for the TAMU Latinx Graduation.

Andrea graduated from Texas A&M in May 2019 and now, she has become the youngest and only Latina to be a Boards and Commissions- Planning and Zoning commissioner for the City of Cedar Hill, one of the 31 counties of Dallas. Potentially Andrea is serving as the youngest commissioner Dallas County has ever seen.